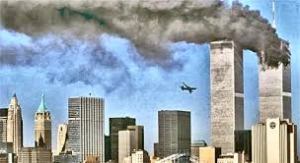 Today marks the 13th anniversary of the attacks on the World Trade Center in New York and the Pentagon in Washington, DC.

I have never told my account of the day that forever changed the US, but i’m in a sentimental mood…

I was freshly out of college and was a n associate in the media office at the National Academies, a government think tank for science, engineering and medicine in Washington, DC.  That day, I remember we were extremely busy, so I was at work before 8am.  There were lines of media trucks at the building, waiting for this important stem cell study to come out, a study that basically said that we have the capability to clone body parts.  That study never saw a single camera flash.  At around 8:00am, the fire alarms went off in the building.  We had to evacuate.  As everyone was ushered outside, I remember feeling like this was a strange day for a fire alarm exercise, especially knowing that this study was coming out.  Less then 10 minutes later, the building shook right in front of my eyes.  I had never seen anything like it.  We thought that the “fire” had destroyed a part of the building.  Nothing else moved, but this concrete, completely stable building.  It was unnerving.  Ten minutes later, we were told we could enter the building.  We had been monitoring the news the entire morning, waiting for news outlets to talk about the stem cell breakthough report. What we saw on our computer screens when we came back to the office was horrifying.  Reports of a plane crashing into one of the World Trade Center buildings in New York.  Then, The second plane hit.  I actually watched it crash into the building.  As we watched the reports of what was going on, we had no idea that a plane had already crashed into the Pentagon.

Remember the building shaking?  The National Academies sits right across the river from the Pentagon.  Probably less than 3 miles away.  I believe our building shook because of the plane crash, not because of some fire in our building.  Then we received reports that a car bomb was set to go off at the State Department.  The National Academies sits directly across the street from the State Department. Suddenly, I didn’t feel like the two planes that crashed into the World Trade Center did so by accident.

All of a sudden, we were told to evacuate.  But before we even left, we were told that traffic was jammed so there would be no way to get our cars out of the parking lot.  Any attempts at taking the subway were quickly diminished as well.  The government shut down all of the subway stations downtown.  Dressed in my business suit and heels, my co-workers and I quietly filed out of the office, taking our belongings with us. As we left the office, I saw swarms of co-workers quickly walking out of the door.

Walking home was painful, but it was surprisingly communal.  Everyone was out in the street walking home because of gridlocked streets and shut down subways.  I talked to people who I didn’t know at all.  We shared a common fear and morning experience.  No one could use their phone service, text was just barely working.  You’d be surprised at the level of friendliness that people extend when tragedy sets.  People helped each other find ways to get home.  Those who’s text were working helped older men and women and children reach their relatives.  For a town that barely talks to one another especially on the street, It actually felt like a family for once in the streets of DC.  I was only able to reach my sister who was attending Howard University at the time, and she told me that school was closed and she was at our apartment that we shared.  When I finally got home, I was extremely tired, my feet felt like pins were still sticking them and I was probably still in shock.

What the hell just happened?

My sister had the news on and we were glued to the station.  She was able to text both of our parents and some extended family that we were together and safe.  I actually didn’t realize that a plane had crashed into the Pentagon until I was at home watching the reports.  It was then that I learned two minutes before our building shook, the Pentagon across the pond had been attacked as well.

I remember feeling a sigh of relief that neither the State Department nor the National Academies had been attacked. I was distraught seeing people jump out of buildings to their deaths.  It was grotesque and I couldn’t imagine the decision those people had to come to, to realize that their final day on earth was that day.  I felt forever connected to those in New York that were experiencing a more harrowing trauma even though our experiences were dramatically different. I cannot imagine seeing co-workers jumping out of buildings, narrowly escaping a building collapsing on your head, losing loved ones, and being covered in soot for miles as you head in to work.  But those of us in DC and New York remain a part of the community with first hand accounts of what happened the tragic morning of September 11th.